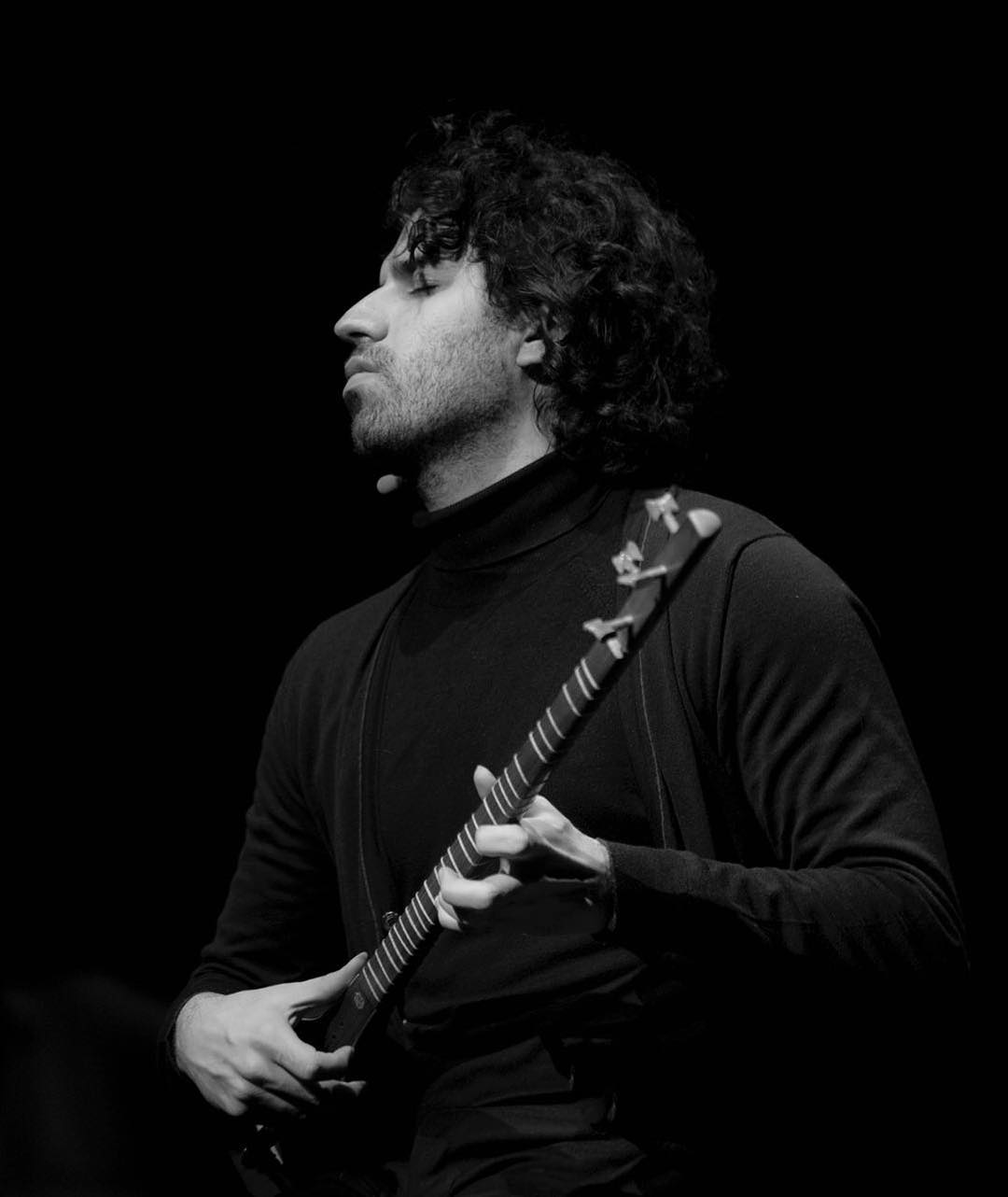 Sohrab Pournazeri, virtuoso of the Tanbour and the Kamancheh, is a sensational phenomenon of modern Iranian music. He is a singer and instrumentalist whose music has surpassed the borders of Iran, fusing with cultures and artists as far and wide as China and the United States. His talent and courage have been acknowledged as extraordinary by no less than Mohammad Reza Shajarian, the great master of Iranian music.

Sohrab was born in 1982 to the musical family of Pournazeris. His father Kaykhosro Pournazeri is one of Iran’s most influential musicologists, and his brother Tahmoures has engendered a new movement in Iranian music through his performances and compositions.

Music was Sohrab’s mother tongue; he learned it as other children learn to speak. At the age of two, he would play his father’s Tanboor (whose body was larger than his) and sing the poetry of Rumi and Hafez. At 13, he was introduced to the stage as part of the Shams Ensemble, and today he is considered one of the core members of the group.

Also starting at age 13, Sohrab studied the techniques of the Kamancheh with Ardeshir Kamkar, and, because of his musical talent, was able to begin playing as a soloist with the Shams Ensemble after two years.

Sohrab has followed in the footsteps of his musical family, yet has achieved distinct and idiosyncratic techniques that have rendered his method of playing into something entirely unprecedented. He also pursues vocalizing and composing with the same unique approach, and has been able to steer the distinct Pournazeri musical form (with its emphasis on passion, emotion, and inventiveness) towards new horizons.

In the summer of 2017, Sohrab performed the ‘C Project’ for the first time alongside Homayoun Shajarian in Tehran’s historical Saadabad Palace Complex, a project he created with the aim of reviving the “wisdom” and old traditions of the Shahnameh (‘The Book of Kings’) for the young generation and familiarizing the audience with the roots of ancient Iranian culture and literature. In this project, Iranian musicians work alongside actors, artists, a film crew, and lighting and sound experts in order to create a unique multifaceted experience for the audience.

Sohrab is also well versed in the regional music of his native Iran, as well as western classical music, and holds a degree in Music Performance. As a soloist and vocalist, Sohrab has collaborated with artists and ensembles worldwide – including Mr. Shajarian, Shujaat Hussain Khan, the Beyond Borders Project, and the Pacific Symphony Orchestra.

Los Angeles Times is the largest metropolitan newspaper in circulation in the United Stated. The newspaper highlighted Mr. Pournazeri’s performances twice, praising him as a “star” and one of “world music’s best known performer.”

Examiner.com is a dynamic entertainment, news and lifestyle network that serves more than 20 million monthly readers across the U.S and around the world. The website featured Mr. Pournazeri’s historic concert at the Nokia Theatre in L.A.

Islamic Republic News Agency (IRNA) is the official news agency of the Islamic Republic of Iran, controlled by the Iranian Ministry of Culture and Islamic Guidance. IRNA has 60 offices in Iran and 30 more in various countries around the world and publishes seven dailies and periodicals. On its official website, IRNA featured Mr. Pournazeri’s album “Hard Makeup”, and discusses his extraordinary career.


SFGate is the Hearst-owned website sister-site of the San Francisco Chronicle and the go-to online source for all news and entertainment related to the Bay Area. With a Pulitzer Prize and 22 million readers each month, the SFGate publishes a moment-by-moment, 360 degree view of San Francisco that is wildly reflective of right now for the most mobile and social audience in the country. The website highlighted Mr. Pournazeri’s concert with the legendary Persian Musician Mohammad Reza Shajarian for Mr. Pournazeri’s “Colors of Transcendence” album and tour.

Telerama is a popular weekly French cultural and TV magazine that is owned by France’s most influential paper, Le Monde. Telerama boasts a circulation of 650,000. Telerama featured Mr. Pournazeri and his album Nishtiman, extoling Mr. Pournazeri as a “prodigy.”

The Huffington Post is a massively popular American news website that is ranked #1 on the 15 most popular political sites. The site has earned a Pulitzer Prize and a Peabody Award, among numerous others. The site featured Mr. Pournazeri’s group, the Shams ensemble, reporting on their cultural impact on Iranian music, as well as their upcoming concert schedule.

Hamshahri is a major national Iranian Persian-language newspaper with a daily circulation of over 400,000, on par with major daily newspapers such as the San Francisco Chonicle, Boston Glove, and Chicago Tribune. Its online edition discusses Mr. Pournazeri’s career, and highlights his record “for performing 50 concerts in one year.”

Shargh is the most popular reformist newspaper in Iran. The newspaper features an article and interview with Pournazeri, highlighting his Tanbour playing.